Good morning, dear tea friends! This morning’s tea is a black tea created from a Chinese cultivar usually reserved for Oolong. It’s called Black Tie-Guan-Yin, from Fujian province. I imagine that its processing would be very similar except for the lengthier oxidation.

Guanyin, also known as Quan Yin or Kwan Yin, is the East Asian Goddess of Compassion and Mercy. I’ve read that Guanyin is a shortened version of Guanshiyin, which means “observing the sounds (or cries) of the world.” Some Buddhists believe that when they depart this world, Guanyin will place them in the heart of a lotus flower. What a lovely image. 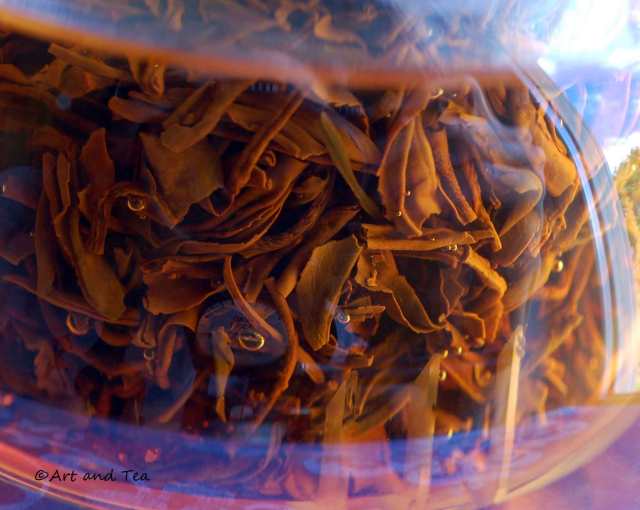 I steeped the long, twisted leaves for 5 minutes in boiling point (212F) water. A distinct chocolate aroma was evident in the dry leaf and also while steeping. 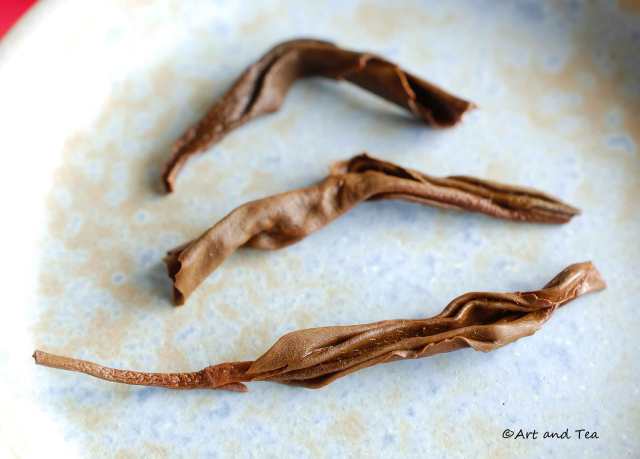 You can see how the leaf is rolled and twisted in this closeup photo. It looks like the pleats on a girl’s dress.

The tea liquor is a dark, rich amber color, very similar to the Ceylon tea I reviewed last week. A spicy, cocoa aroma wafts up from my glass teapot.

The flavor is deep, full-bodied, and satiny smooth with tangy notes of bittersweet cocoa and hints of spices – nutmeg, cinnamon and a whisper of mace. If I had to speak only one word about this tea, it would be – yummy.

Summer is officially over as Labor Day weekend passes and the kids return to school. How did that happen so fast? Thoughts of sweater weather ahead cause me to turn to the darker, rich-bodied teas. This is a great selection to add to my cupboard.

“Autumn seemed to arrive suddenly that year. The morning of the first September was crisp and golden as an apple.”