Hello, my dear tea friends! Today started out with more camera problems, this time with the batteries. It’s not my month for smooth camera operations, is it? Anyway, I managed to get my camera to work after a half hour of charging a battery which appeared to be fully charged. I’ll have to investigate further later. Now it’s time for a cup of tea!

This week’s tea looks like a white tea and even tastes like one, however, it is a black tea, specifically a second flush Darjeeling from the Margaret’s Hope estate called “White Delight”. 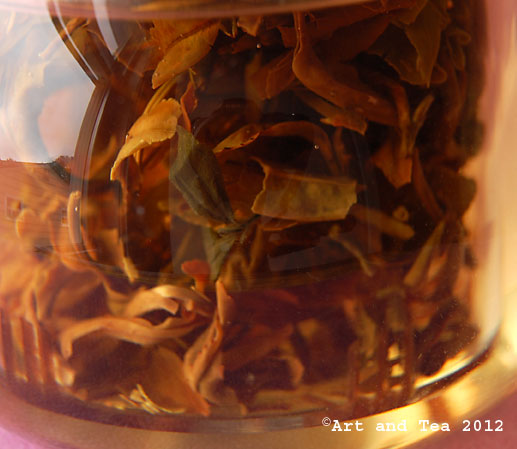 As you can see from the photo above, the lovely, variegated-colored leaf is enormous. I steeped the leaves for my normal 3 minutes in boiling point (212F) water but I think this tea could stand a longer steep time. It’s incredibly smooth with none of the characteristic Darjeeling “bite”.

You can read more about the well-respected Margaret’s Hope estate in my post here.

I tried to capture a full leaf set so you can see what is meant by a “fine plucking”, two leaves and a bud. The bud is the brand new growth and, as you can see above, there are 2 little bud leaves there. Think of when you pinch a plant to encourage branching. I do this with my coleus plants. Pinch the tip and 2 branches will grow where there was once one.

The color of the tea liquor is amazing, a deep golden yellow with a tinge of peachy-pink, like the blush of a ripe fruit.

The fragrant aroma smells of apricots which carries into the flavor, along with hints of melon and muscatel. The muscatel is the only hint that this is a second flush Darjeeling. The rest of the flavor notes speak to me of high-quality white tea. I have been told that the estate Manager decided to name it “White Delight” because it is so reminiscent of a white tea.

Sometimes I recommend a second flush Darjeeling for those who like to put milk in their Darjeeling cuppa. This would not be a tea for that. Even though it’s bursting with flavor, it’s just too mild for anything beyond a drop of honey.

The sky looks like a soft gray blanket today and rain has been falling softly on and off all morning. It’s a great day to curl up inside with a good book and a pot of tea.

As always, thanks for stopping by and have a wonderful week!

“The only noise now was the rain, pattering softly with the magnificent indifference of nature for the tangled passions of humans.” 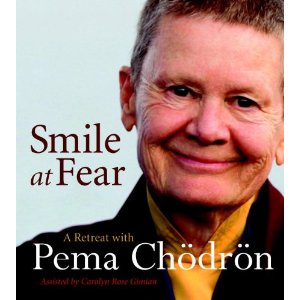