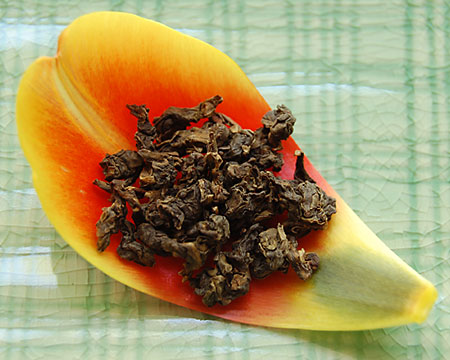 My daughter gave me a lovely bouquet of tulips for Mother’s Day. This morning I was cutting the stems down and rearranging them in a vase when a petal fell onto the kitchen counter. It cradles this morning’s tea, a Tie-Guan-Yin Oolong called Special Tribute.

There is a legend regarding how this particular Oolong came into being. Many years ago in Fujian Province in China, a poor tea farmer named Mr. Wei would walk by a temple everyday on his way to the tea fields. As each day passed, he noticed that no one cared for the temple so it was becoming quite run down. Inside he found a statue of Guan Yin, the bodhisattva of compassion. He did not have the means to fix up the temple but he felt that something needed to be done. One day he brought his broom and some incense. He lit the incense as an offering to the Goddess and swept the temple clean. That night Guan Yin came to him in a dream and told him of a cave where he would find a beautiful treasure for himself and to share with others. The treasure turned out to be a tea shoot which Mr. Wei planted and nurtured into a large tea bush, producing the finest tea in the region. He shared cuttings with all his neighbors and started calling the tea produced from this bush Tie-Guan-Yin. Mr. Wei and all his neighbors prospered and were able to restore the temple to its beauty and many came to gather there. Now Mr. Wei felt joy everyday as he passed the temple on the way to his tea fields.

Isn’t that just a lovely story? 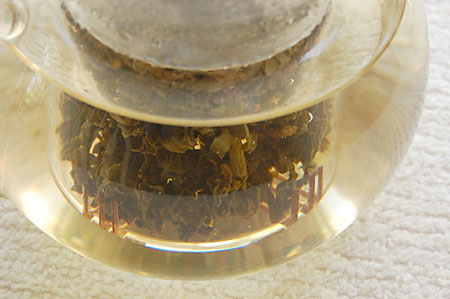 I steeped the rolled leaf for 3 minutes in 180 degree F water. It relaxed a little after steeping but, for the most part, still kept its curly appearance. 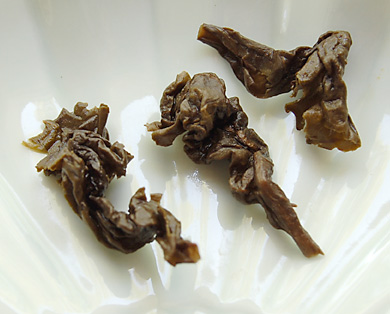 The pale yellow liquor is smooth and slightly sweet with nutty, woodsy notes and a hint of floral in the finish. 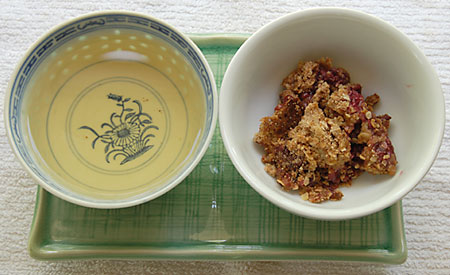 I enjoyed my cuppa with the last of the blackberry crumble I made the other evening. Crumble is so easy to make and you can substitute your favorite fruit. Mix 1/2 cup each of rolled oats, brown sugar, and flour with a teaspoon of cinnamon. Then cut in 1/4 cup of butter until it’s crumbly. Place your choice of fruit (about 2-4 cups, soaked in sugar beforehand, if you wish) in a baking dish and sprinkle the crumble over it. Bake at 350 until browned. In my oven, it took about 25 minutes. Mmmmm….

“Develop interest in life as you see it; in people, things, literature, music – the world is so rich, simply throbbing with rich treasures, beautiful souls and interesting people.  Forget yourself.” 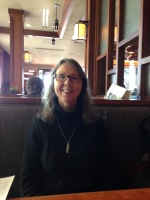