I must admit that I chose this morning’s tea just for the name alone – Water Fairy Oolong, also known as Shui Xian. Grown in the Fujian province of China, the huge, dark chocolate brown leaves are hand-rolled to resemble a frog’s leg. 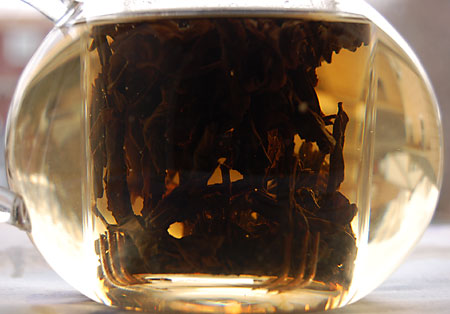 Of course, there’s a story about how this tea got its ethereal name. I love tea stories so gather round, my friends, teacups in hand…

About 900 years ago, a Song dynasty emperor was traveling with his entourage to southern China to inspect a tea garden. It was a hot summer’s day and everyone soon became very thirsty. They searched high and low for water but could find none. One of the scouts spotted a bush with bright green leaves and his extreme thirst led him to place one of the brightly colored leaves in his mouth. The leaf was very juicy and he found that it quenched his thirst as he chewed it. Soon, everyone was chewing the leaves of this magical plant. Of course, it was the tea plant that produced Shui Xian tea. So, the emperor named the tea “Water Fairy” for its magical thirst quenching powers. 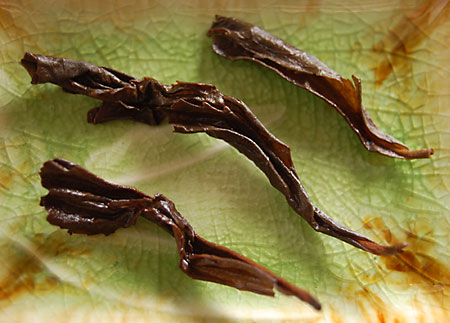 The leaves do look thirst quenching, don’t they?

I steeped them for 4 minutes in 190 degree F water. Even though the leaves look very dark, they are still not oxidized as much as a black tea is so it’s best to use a water temp below boiling point.

This tea is well known for its “narcissus” fragrance. The light amber liquor is silky smooth on my tongue with a lingering honey sweetness felt in the back of my mouth for a long time after sipping. Notes of chestnut and delicate peach round out the flavor.

Today is a day to relax at home and work on some art projects – making a polymer button for my finished Winter Woods vest and starting my winter palette free-form bracelet.

What tea are you enjoying today?

Whatever special nests we make – leaves and moss like the marmots and birds, or tents or piled stones – we all dwell in a house of one room – the world with the firmament for its roof – and are sailing the celestial spaces without leaving any track. ~John Muir 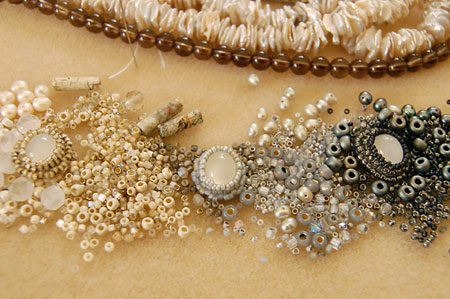 As I write this, I’m watching rivers of raindrops slide down my window, silvering the world outside. I imagine the raindrops soaking deep into the gradually thawing earth, awakening the roots, seeds and bulbs that silently wait there ready to burst into their spring growth. Creation energy is whispering in the air…

That gently awakening energy has inspired me to create my own beady concoctions here in my studio. Taking direction on bead color mixing from Beverly Ash Gilbert’s Beaded Colorways book, I’ve experimented with some bead soup of my own in a neutral, winter-inspired palette.  I originally wrote about my color inspiration here.

The small moonstone cabochons I found in my stash are encircled with some beads from each soup I mixed.

I’ve added some pearls and gemstones in similar hues to round out the soups. 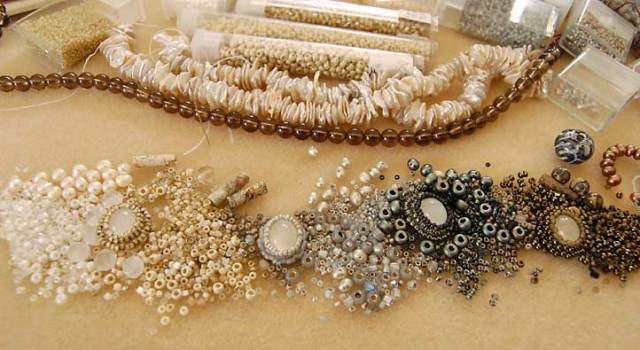 Another free-form bracelet is cooking…

The weather couldn’t have been better at this time of the year – sunny and near 50 degrees! – for the move yesterday. They’re all moved in and now the unpacking and settling into a new home begins. There’s a lot of moving energy around me these days, including a company move coming up this summer.

I am sipping a cup of green Ceylon tea this morning, from the Idalgashinna estate, located in the Uva province in southeastern Sri Lanka.

Tea growing on the island of Sri Lanka was started in the late 1800s by a Scottish gentleman named James Taylor. Up until that time, coffee was the number one crop on the island until a rust fungus killed the majority of coffee plants. Starting with a basic tea cultivation knowledge learned in Northern India and 19 acres of land, he soon turned a small business into a very successful one, selling his tea for the first time at the London auction by 1873.

As you can see, this particular green tea has quite a large leaf. After steeping for 3 minutes in 180 degree F water, some of the twisted full leaf releases that shape and some stay tight. As I poured my first cup, a distinct vegetal aroma rose from my glass teapot.

A teapot full of sunshine.

The liquor is light and more delicate than other green teas, with a floral note reminiscent of a “green” Oolong. Its brightness, characteristic of Ceylon high grown teas, is revealed as the tea cools. 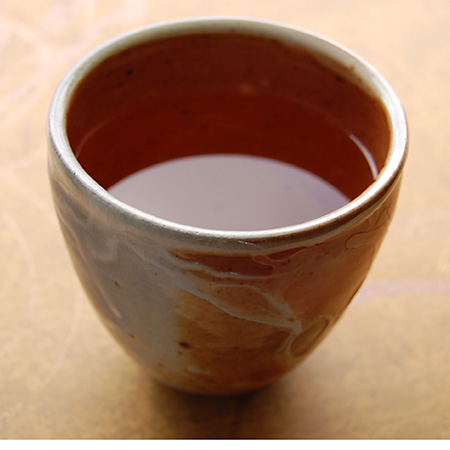 With deep blue skies and fast moving fluffy clouds, today is the perfect day for a hike into the late winter woods. I like to go every Sunday afternoon for my weekly dose of nature.

As I started down the woodsy path last week, I sensed a gradual awakening that tells me that we are almost at spring’s glorious door.

The fields are snowbound no longer;
There are little blue lakes and flags of tenderest green.
The snow has been caught up into the sky–
So many white clouds–and the blue of the sky is cold.
Now the sun walks in the forest,
He touches the bows and stems with his golden fingers;
They shiver, and wake from slumber.
Over the barren branches he shakes his yellow curls.
Yet is the forest full of the sound of tears….
A wind dances over the fields.
Shrill and clear the sound of her waking laughter,
Yet the little blue lakes tremble
And the flags of tenderest green bend and quiver.

There might have been a snowstorm here last Tuesday but I have this gorgeous blooming hyacinth on my kitchen windowsill to remind me that spring is getting closer.

Today I’m helping my daughter move into her new home and, as we want to get an early start to the day, my tea is quickly being poured into a travel mug as I head out the door. I will return tomorrow for our weekly cup of tea together.

I leave you with this wonderful quote from Thich Nhat Hanh.

“Suppose you are drinking a cup of tea. When you hold your cup, you may like to breathe in, to bring your mind back to your body, and you become fully present. And when you are truly there, something else is also there—life, represented by the cup of tea. In that moment you are real, and the cup of tea is real. You are not lost in the past, in the future, in your projects, in your worries. You are free from all of these afflictions. And in that state of being free, you enjoy your tea. That is the moment of happiness, and of peace.”

This is a weekend to celebrate love and the beginning of a new year. The Year of the Tiger. When I think of tigers, I think of power, strength and wildness. Also, beauty and ferocity, a melding of light and dark. Tiger has much to teach us about these attributes.

This morning’s tea, a Chinese Jasmine, is a melding of 2 different types of plants, the camellia sinensis (tea) and a fragrant flower that opens only at night.

Jasmine flowers are plucked in the dew of the morning and gathered together for scenting green tea. As tea leaves are highly susceptible to absorbing scents, the marriage of these components in carefully controlled conditions produces a wonderfully fragrant tea. 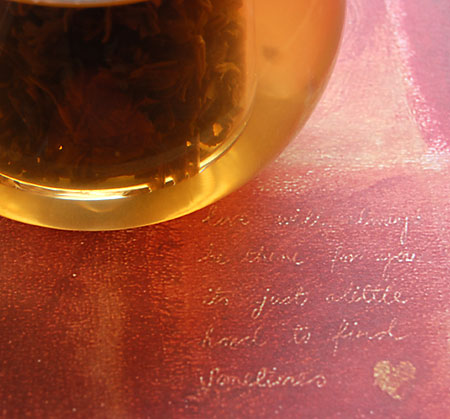 I steeped the leaves for 3 minutes in 180 degree F water. The soft floral aroma greeted me as I lifted the lid of my glass teapot.

Glowing like a warm sunset, the tea liquor imparts a delicate, sweet flavor with an overlay of floral notes on the green tea’s vegetal character. A bright finish lingers on my tongue.

As I sip my tea, I catch images of sitting in a summer garden, drinking tea from fragile cups shaped like tiny eggs, the fragrance of blooming flowers all around. 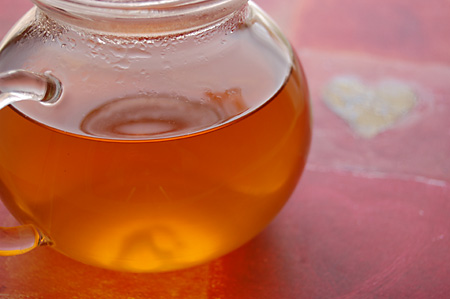 As you can probably tell, I am so ready for spring’s arrival and its gentle fuzz of color as inner growth manifests once again in the outer world.

I have been thinking a lot lately about opening my heart and what that means to me. It conjures words like breathe, awareness, connection, listening, forgiveness, acceptance.

How do you open your heart?

Go to your bosom; Knock there, and ask your heart what it doth know.